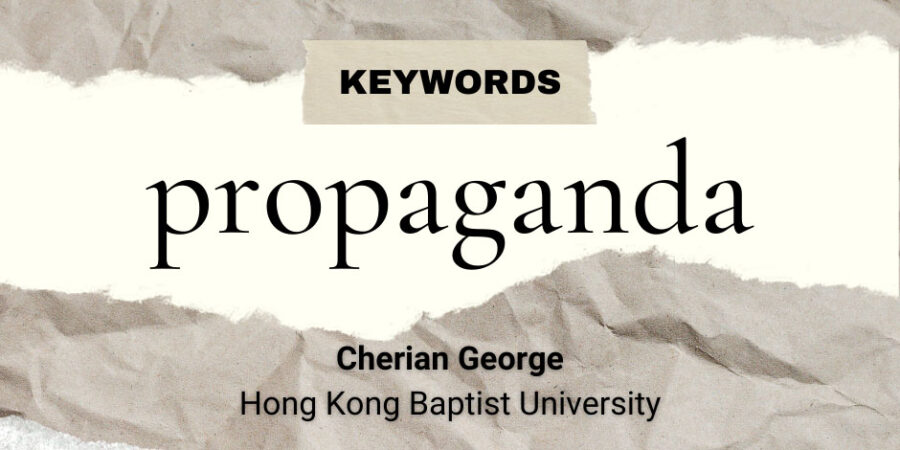 It is a label that people apply on views they disagree with. Is there a better way to understand “propaganda”? CHERIAN GEORGE provides a primer.

Propaganda can be defined as one-way communications designed by their sponsors — states or other powerful groups — to persuade large numbers of people to think and act in line with the sponsors’ preferences. The term is mostly used pejoratively: it is distinguished from more acceptable forms of persuasive discourse by its heavy reliance on emotive content, rather than appeals to reason backed by accurate information.

All states produce propaganda, and international conflicts invariably involve the use of propaganda along with military, economic, diplomatic and other levers. “Propaganda for war”, along with  advocacy of national, racial or religious hatred, is a violation of international human rights treaties. In contrast, a form of international propaganda that is widely viewed as legitimate involves marketing a country’s globally appealing attributes and values, to enhance its “soft power”. Such efforts seem to be most effective when channeled through culture industries, avoiding controversial current affairs; soft power tends to be undermined by aggressive and intolerant rhetoric that disrespects a diversity of opinions and beliefs.

In more open societies, state propaganda must contend with counterflows from overseas plus domestic dissent, most of which the government cannot punish or censor. Even state-funded external broadcasters in several liberal democracies, such as Britain’s BBC and Germany’s DW, are not required to support the policies of the government of the day; they can and do question government propaganda.

From a democratic perspective, propaganda is most problematic when its sponsors simultaneously use coercion to dominate public discourse. In non-democracies, propaganda campaigns usually incorporate incitement of hatred against dissenters, whose civil rights are not sufficiently protected. Such illiberal propaganda works hand in hand with censorship; even private media may be pressured to amplify state propaganda. Flooding the online space with propaganda as well as diversionary content —  as China has been able to do behind its “Golden Shield” — has been regarded as a clever censorship technique in itself, since it makes disfavoured information harder to locate at a time when attention is a scarce commodity.

The power of propaganda is often overestimated by opponents of the point of view being propagated. Even in less democratic societies, target populations’ minds are not blank slates for governments to write on. On the other hand, propaganda’s effects are often underestimated by in-groups, who may be unwilling to believe that countries they admire are trying to manipulate them or that they are susceptible to such manipulation. The most effective propaganda is unnoticed, as it blends into people’s culture, ideology and commonsense understandings of the world.