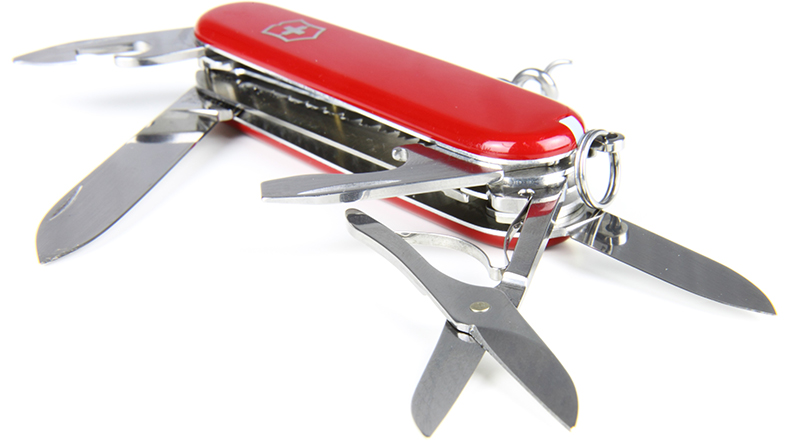 DONALD LOW, professor of practice in public policy at the Hong Kong University of Science and Technology, explains what Singapore can learn from the Swiss — the Swiss army knife, that is.

The recent Parliamentary debate on whether Singapore should have a legislated minimum wage has generated more sound than light. It has also been needlessly polarising, with MPs from the ruling party stoutly defending the Progressive Wage Model (PWM) as superior to a minimum wage (MW) and some union leaders taking umbrage at the suggestion that the government’s resistance to an MW was based on the “folksy wisdom and beliefs” of union leaders.

The reality is that the PWM has more in common with an MW than is commonly acknowledged. The PWM is essentially a “collection” of industry-specific minimum wages; if it was extended to all industries, we would effectively have economy-wide minimum wages – with the key difference being that these are set by tripartite arrangements, and they vary from industry to industry. In emphasising the differences between the PWM over the MW, and in arguing for the superiority of one over the other, we forget the fact that which policy instrument is superior depends on the problem(s) we are trying to solve.

Sweden and Denmark’s unusual approach to minimum wages is the result of their strong tradition of tripartism and high unionisation rates. Singapore also has a tradition of tripartism, but we are unlike Sweden and Denmark in at least one important respect: employers in Singapore have access to a much larger pool of low wage foreign labourers (as a percentage of the workforce). This is the result of our model of cheap sourcing, in which businesses in certain labour-intensive industries compete mainly on low (labour) costs. This, in turn, leads to a race-to-the-bottom in which employers source workers from the lowest wage countries.

This access to a large pool of lower cost migrant workers limits the effectiveness of the PWM for the simple reason that raising wages or expanding the scheme to cover more industries may cause employers to substitute foreign workers for costlier resident ones. As Professors Linda Lim and Irene Ng said in a recent commentary for Channel News Asia:

“Since PWM applies only to Singaporeans and permanent residents, it may have the perverse impact of increasing employers’ preference for hiring foreign workers, especially since they can be selected for age, skill, physical strength, endurance and other personal qualities that can yield higher productivity at a lower wage than elderly Singaporeans in the same labour pool who will now cost more.”

A second limitation of the PWM is that it is (or can be) administratively complicated and cumbersome as it involves intensive tripartite consultation and negotiations. The PWM is an example of a highly engineered intervention: although targeted and precise, it brings about improvements too slowly and in too few areas.

The limitations of the PWM can best be illustrated with a concrete example: the intermediate and long-term care (ILTC) sector. This is a labour-intensive sector that is quite reliant on foreign workers and is usually provided by non-government (but government-subsidised) entities, many of them run on a non-profit basis. It is also an industry where technology adoption might raise labour productivity (of the nurses, nursing aides and social care workers) and wages – exactly the kind of “non-tradable” service industry that the PWM should be targeting.

In practice though, it is hard for bureaucrats and unionists to force the pace of technology upgrading and raise wages. One limitation is that the ministry responsible for this sector – the Ministry of Health – may have a greater interest to keep a lid on rising costs in healthcare than to increase the wages of workers in this sector. The case for technology adoption in the ILTC sector may also be weakened by the fact that foreign labour is cheaper than the new technologies that reduce labour intensity.

Not surprisingly, the sector finds it hard to attract locals as the work is hard (due partly to low usage of technology), wages are low, and the job status is not high. Increasing the rate of technology adoption in this industry would require a combination of interventions: higher minimum wages in the healthcare sector, technology grants to service providers, and possibly higher prices to consumers (which can be offset by higher user subsidies). In the absence of policy shifts elsewhere, it is unlikely that the PWM on its own can solve current problems in the ILTC sector. A failure to raise wages, increase productivity and attract more locals to the ILTC sector is also likely to be a growing problem with a rapidly ageing population.

Minimum Wage to the rescue?

A statutory minimum wage that is applied to all workers, including foreigners, addresses some of the limitations of the PWM but has disadvantages of its own.

To begin with, Singaporeans may baulk at the idea of extending minimum wage legislation to foreign workers. But ironically, the interests of local workers are best protected if employers of foreign workers are required to pay them the same way as they do Singaporeans. If not, the introduction of a minimum wage – as with the increase of PWM wages or its expansion to other industries – is likely to increase employers’ preference for foreign over more expensive resident workers.

The correct way to protect the interests of lower wage resident workers is to ensure that comparable foreign workers cost employers a little more, i.e. to ensure a “wedge” between the wages of resident workers and their foreign counterparts. The right policy tool for this is the foreign worker levy. To the extent that the government wants employers to favour resident workers, this should be reflected in the levy which must also be on top of the wages that locals doing the same job are paid. Excluding foreign workers from minimum wage legislation only entrenches a two-tier labour market system, with its attendant distortions and inefficiencies.

What about the argument against the Minimum Wage that it is not linked to skills upgrading and therefore productivity? A statutory minimum wage is a blunt instrument that does not necessarily increase the skills content and productivity of firms that engage lower wage workers. But the main reason that increases in MW in other jurisdictions have usually not led to higher unemployment is that employers adjust by improving processes to reduce labour-intensity of their operations, thus increasing labour productivity to “justify” the higher minimum wages. While we should not be overly optimistic that this will happen in all cases, neither should we conclude that it will not happen at all.

We should also not assume that the sole determinant of labour productivity is the skills of workers. The assumption that having more skilled workers naturally leads to higher productivity is an example of what economists call a “fallacy of composition”. A simple example can illustrate this. As an employee, I may learn new skills such as data analytics. But if my employer does not apply business processes which make use of my skills in data analytics, the fact that I have higher skills does not raise my productivity nor the firm’s.

What about the Workfare Income Supplement?

Strangely, the debate did not highlight the fact the government has a potentially valuable instrument to increase the welfare of lower-wage Singaporean workers – the Workfare Income Supplement (WIS).

Besides raising the foreign worker levy to get employers to prefer resident workers, the government can also directly increase the incomes of lower wage working Singaporeans by increasing the WIS, i.e. cash and CPF top-ups to older, low wage workers.

One advantage of WIS is that it financed by taxes and therefore by society at large, whereas the PWM and MW are financed by employers and consumers. The fear that minimum wages (whether of the PWM or the statutory variety) would raise prices does not apply in the case of a WIS increase. At about 0.1 percent of GDP, the WIS is also an efficient and affordable way to raise the incomes (and savings) of lower wage Singaporeans.

A second advantage of the WIS is that it covers self-employed workers, whereas the PWM and MW cover only wage-earners. The WIS is thus the easiest way of providing gig economy workers financial support, an important advantage given that the share of such workers in the Singapore economy is likely to increase.

The common criticism of the WIS is that employers should not be “let off the hook” to pay higher wages; a second criticism is that employers with more bargaining power will simply absorb any increase in the supplement by paying their workers less by the same amount.

It is worth emphasising that someone must pay the higher incomes of lower wage workers – there is no free lunch. With the PWN and MW, it is employers and, to the extent they can pass on their higher costs, consumers who foot the bill. With the WIS, it is taxpayers. Unless one does not wish to raise wages at the bottom end of the labour market, the debate is over how best to do it. The preceding analysis suggests that we need all three policy tools as each addresses a different problem.

As for the fear that the any increase in the WIS goes mainly on employers, this is best addressed by other policy tools that improve labour market flexibility and increase the bargaining power of (low wage) workers. In fact, making sure that employers do not cut wages in response to increases in the WIS should be one of the roles of the unions.

Singapore’s problems of a high reliance on low-cost foreign labour, low wages for workers in labour-intensive “non-tradable” industries, and the need to upgrade the skills of older, less educated workers are interconnected. But just because these problems are highly connected does not mean they can be simultaneously solved by a single policy tool. We probably need (to expand) all three tools: PWM, MW and WIS.

Every policy tool has its strengths and limitations. The problem is that if we have only one tool, we tend to think that it can do more than what it was designed for. But there is no need to defend our preferred tool if it cannot solve a problem it was not designed for. No one should feel the need to defend the hammer for its inability to open a can or a wine bottle.

Rather, we should bring a “Swiss army knife” to tackle our labour market problems. Each tool of the Swiss army knife is designed to address a particular problem. It does not make sense to argue for the superiority of one tool over another without an understanding of the problem we are trying to solve. We also need complementary tools – such as the foreign worker levy, grants to facilitate technology upgrading and process improvements, and efforts to increase the bargaining power of workers – to augment the primary ones.

Just as a Swiss army knife that has more tools is more useful than one that has fewer, so too should policymakers embrace a diverse set of policy tools to deal with our various labour market problems.

Donald Low is director of the Institute for Emerging Market Studies at the Hong Kong University of Science and Technology. He is also the co-author (with Cherian George) of PAP v PAP: The Party’s struggle to adapt to a changing Singapore.