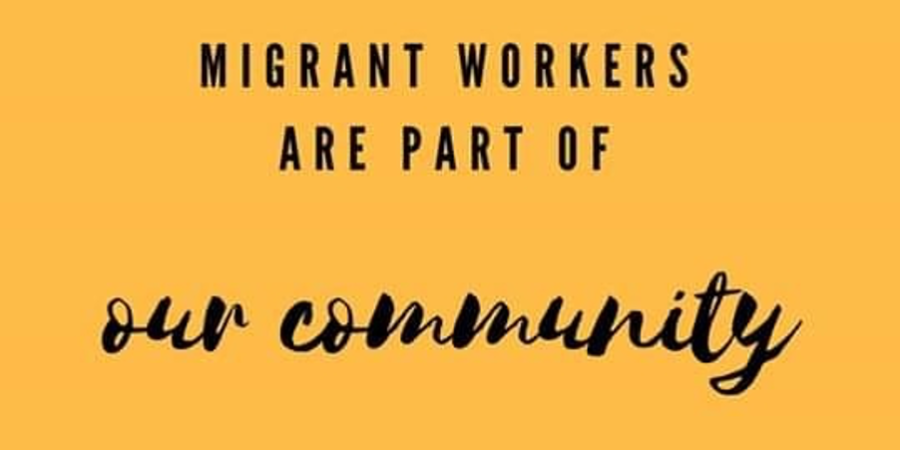 Terri-Anne Teo and Yasmine Wong (Research Fellow and Senior Analyst respectively at the S. Rajaratnam School of International Studies, NTU) consider how recent manifestations of pandemic-era xenophobia and social collaboration in Singapore can be understood in terms of ontological security.

Singapore has settled into some semblance of a new normal amid the fight against COVID-19. However, the continual stress on its social fabric has exposed faultlines. While xenophobia is not a new phenomenon here, the pandemic has amplified its visibility in the public sphere. At the same time, multiple grassroots efforts have arisen to provide aid to low-waged migrant workers and other disadvantaged groups. The concept of “ontological security” helps explain these seemingly divergent reactions. We call for a shift in Singapore’s landscape of ontological security, to accommodate a national imaginary that is inclusive, compassionate and collaborative.

First conceptualised by R.D. Laing as indicating a “continuous person” who seeks stability in their existence, the idea of ontological security was developed by social theorist Anthony Giddens as an explanation for a “person’s fundamental sense of safety in the world” which “includes a basic trust of other people”. As Giddens puts it, security is “necessary in order for a person to maintain a sense of psychological well-being and avoid existential anxiety”.  Ontological insecurity, conversely, involves the disruption of a security of “being”—a break in one’s sense of safety and security within public and private spheres. Stuart Croft adds that these disturbances may be felt at various levels, from everyday routines to economic and political institutions. Roger Silverstone elaborates that ontological security is sustained through the familiar and predictable, including through rhetoric and public discourse that neatly demarcate ‘us’ from ‘them’. This said, Catarina Kinnvale and Jennifer Mitzen argue that social competition is not the only way people respond to threats to their ontological security. There is also potential for collaboration when faced with instability, where shared anxieties create space for positive change. Together, these ideas help explain the deepening of divides in Singapore, but also give us a glimpse of a society that we may aspire toward.

Disruptions to societal conditions trigger changes in collective narratives, which hold society together. As ontological insecurity increases, individuals, groups, states and organisations attempt to secure a stable identity, which invariably involves a process of securing one’s identity in juxtaposition to the ‘other’.[1] In wider international relations (IR), this is seen in the context of foreign policy decision-making and constructions of transnational and national identities.[2] This reaction is therefore familiar, albeit problematic in its exclusions. In the same way, ontological insecurity explains how COVID-19 affects policy change and everyday life where contagion and (perceived) potential carriers constitute a security threat.

Nationally, COVID-19 has brought greater salience to a pre-existing sense of threat. While Singapore’s national identity has altered over time, it remains grounded in state-cultivated narratives of vulnerability and surviving external threats.[3] This is evident within Singapore’s defence policies, nation-building initiatives, the curation of its National Education policy that highlights the need to defend Singapore, and political rhetoric underscoring a prevailing need for survival.[4] The construction of certain groups and individuals as risks or potential threats in this time is a reiteration of existing narratives and subjectivities.[5]

An ‘us vs them’ narrative is particularly pertinent in the context of a health crisis. Susan Sontag says that where diseases are shrouded in mystery and acutely enough feared, they will be felt to be morally contagious. Indeed, pandemic anxieties have manifested itself in xenophobic moral panic. In Singapore, a letter in Mandarin newspaper Zaobao blamed low-waged migrant workers’ poor hygiene for outbreaks in their dormitories, even though this was eventually traced to cramped housing conditions.

Beyond this pandemic and Singapore, the condemnation of the ‘other’ as dirty is commonplace, a culmination of what Kinnvall terms “colonial constructs, neoliberal rationalities, cultural reproductions, and narratives of the past and present”. In contemporary Singapore, these are buttressed by practices of state management, such as the surveillance and regulation of low-waged migrant populations, which contribute to stereotypes of strangeness, danger and cultural inferiority that are further perpetuated within mainstream media.[6]

Other narratives reflect the perceived economic abandonment felt by a population affected by the socio-economic impact of the crisis. The commonly held perception of the economic migrant as an ‘other’, resistant to economic and social integration, resurfaced during this pandemic. Foreign PMETs have reported feeling unwelcome by Singaporeans, with anti-foreigner vitriol visible on social media. Academic Catherine Gomes observes how the vilification of higher-waged migrants—commonly referred to as “foreign talent”—is familiar, often serving as a proxy for discontent towards government policies that affect the livelihoods and lifestyles of Singaporeans. For instance, the ‘Singaporeans first’ or ‘Singapore for Singaporeans’ narrative harks back to protests against the Population White Paper of 2013. Establishing a neat division between citizens and non-citizens reproduces a narrative of deservedness that privileges the former at the expense of the latter, a fracture carved deeper by an ambivalent future.

In these uncertain times, ontological security is sought through the construction of the securitised migrant where the “enemy is no longer outside the nation, but threatens the nation-state from within”.[7] In Singapore, the turn inward is apparent through expressions of xenophobia cast on migrants within the nation-state. The illusion of knowing the ‘other’ as securitised, dangerous and contagious allows for the preservation of a national ‘self’, a result that is unifying and fractious in equal measure.

Problematic treatment of migrants workers has been met with public criticism and calls for structural changes. Support appeared in the form of collaborations between state and non-state actors such as grassroots organisations, NGOs and fundraisers dedicated to low-waged migrant workers. In addition, public denigrations of low-waged migrant workers by social media influencers have been widely condemned.

The coming together of actors and responses from the local and international community in support of low-waged migrant workers speak to critical scholarship on health politics and its relationship with ontological security. Joao Nunes argues that contrary to the traditional understanding that health is defined by “fear-based understanding[s] of security”, health can be a “bridge of peace”, where it becomes the “superordinate goal” that facilitates dialogue and solidarity across state and non-state actors. This approach is apparent within cooperative efforts during health crises that seek to create joint health ventures across nations and groups.

This goal is shared among the ground-up initiatives, which produced counternarratives of Singaporean identity as inclusive of and responsible for both citizens and non-citizens. For instance, a social enterprise founder said recently that “as COVID-19 has revealed, we are all interconnected; and in recognising this interconnectivity, caring for one another will truly enhance our social compact”. Such responses speak to what Kinnvall and Linden call “dialogical ontology”, which refers to the recognition that individuals are not just autonomous beings but are inter-related, able to empathise, treat and understand those we conventionally identify as ‘others’, whether they are migrants, strangers or enemies. This recognition expands Giddens’ original notion of ontological security as representing “a security of being” to Kinnvall and Linden’s conception of security as “being for the other: that is, taking responsibility for him or her” as a matter of community.

It would be remiss to ignore the everyday treatment of low-waged migrants in Singapore, who are historically documented to be marginalised, subject to stereotypes of inferiority and securitised.[8] The longevity of compassion and active campaigning for structural change is necessary and yet to be seen. Yet cooperation and acts of compassion in the face of crises are not unprecedented. In the immediate aftermath of the Little India Riots, netizens were quick to criticise xenophobic and racially-charged sentiments targeting low-waged migrant workers as displays of racism and ignorance, with calls for a deeper inquiry into the incident and the treatment of workers, as well as volunteers handing out flowers near the incident site in an act of solidarity.

These diverse practices of ontological security-seeking contest the assumption that ‘us’ and ‘them’ exist as binary, distinct and homogenous entities. Multiple understandings of identity and belonging exist within groups and individuals, informing how uncertainty functions both as a threat and a potential space for synchronicity and collaboration. Therefore, while some segments of society find unity in ‘us/them’ narratives, troubling this binary and disassociating ourselves from dominant narratives of identity may allow for a greater sense of shared societal responsibility.[9]

Singapore treads the line between managing the rights and privileges of its citizens while remaining attractive to foreign businesses, investors and economic migrants. The desire to maintain its status as a cosmopolitan global city co-exists with a national identity that includes narratives of vulnerability and threat, a tension exacerbated by the pandemic. While economic survival is said to justify Singapore’s need for economic migrants and striated migrant labour policies, this narrative struggles against the current of public discourse where foreigners are seen as threats in a historically resource-scarce economy. Reflecting on reactions to the pandemic, collaborative efforts suggest how societies faced with insecurity can learn to react and adapt as a community, rather than relying on narratives defined by the securitisation of the ‘other’.

The theory of ontological security contributes to our understanding of reactions to the pandemic in two ways. First, the intersubjective nature of ontological security explains the surge in xenophobic discourses, where the increase in security for one group likely decreases that of the ‘other’; second, when identity is understood as multifaceted and differentiated, ontological insecurity can give way to social arrangements and associations rather than just insularity and protectionist reactions. In Singapore, we see the former through ground-up efforts serving as a foil to a limited understanding of Singaporean identity that is positioned vis-a-vis the foreign ‘other’.

If Singapore as a society works collaboratively toward the mending of inequalities exposed by the pandemic, it may well be possible for a renewed homeostasis of ontological security post-crisis, based on trust between groups, and a revised notion of ‘us’ that surpasses the boundaries of citizenship.

[1] Catarina Kinnvall, ‘Globalization and Religious Nationalism: Self, Identity, and the Search for Ontological Security’, Political Psychology 25, no. 5 (2004): 741–67.

[8]   Grace Baey and Brenda S.A. Yeoh, ‘“‘The Lottery of My Life’”: Migration Trajectories and The Production of Precarity among Bangladeshi Migrant Workers in Singapore’s Construction Industry’, Asian and Pacific Migration Journal 0, no. 0 (2018): 1–24.