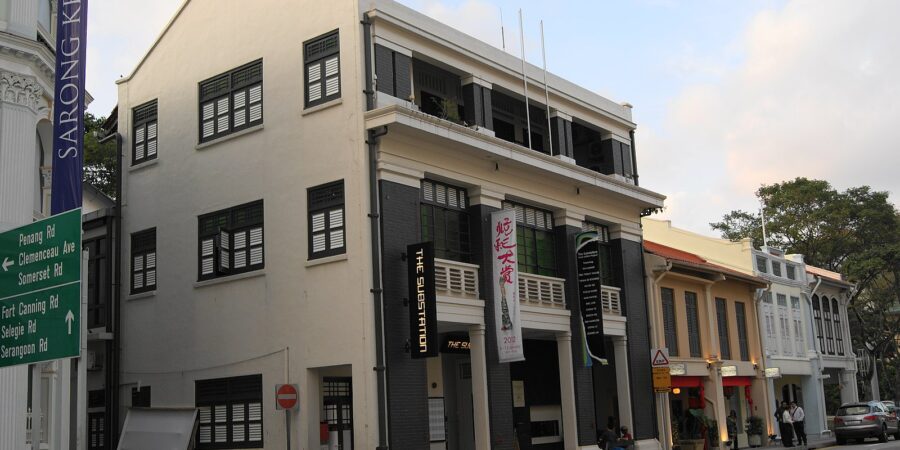 Following the announced closure of arts and cultural institution the Substation, independent Transnational Cultural Studies scholar Liew Kai Khiun recalls his own memories of the premise and its connections to research. The author has also been actively involved in Singapore’s civil society for the past two decades, in areas such as conservation, animal welfare, and migrant workers rights.

Since the Board of the Substation’s official announcement of the closure of the premise, in July 2021, countless tributes from Singaporeans from diverse artistic backgrounds have poured across social media, describing how they have benefitted from the premise and its programs for the past three decades.

For me, the Substation filled the indescribable intellectual and cultural void of my late teens, and its relevance became strong during my years in military conscription.  Gigs at the venue were also a critical site for a more meaningful multicultural encounters and interactions, particularly with the Malay-Muslim dominated punk-rock community. Subsequently these experiences became integral to my scholarly research. Relevant publications I have based on this foundation over the past two decades include topics on Singapore’s youth subcultures, alternative music scenes and more recently the Substation’s role in exhibiting Singapore’s punk heritage.

The Year 1991. The “Evil Empire” of the Soviet Union became history. In the General Paper of my “A” (Advanced) Levels examinations, I mistakenly attributed Deng Xiaoping’s “To be rich is to be glorious” quote to Margaret Thatcher (probably the reason for my “C” grade). For Singaporean teenagers like me, the “kinder and gentler” nation envisioned by the new Prime Minister Goh Chok Tong meant Hong Kong’s “Category III” soft-porn movies in local cinemas. The year was supposed to end well with a slow dance in a Junior College prom-night over Bryan Adam’s “Everything I do, I do it for you” the theme song of Robin Hood (1991) broadcasted ad nauseum over the radio.

Everything seemed fine. That was until I was introduced by my friend Harold Seah to the Substation. Entering the “Garden”, my senses were immediately overwhelmed by the chaos of growling vocals, thumping drums and swirling guitars on the stage, with audiences diving from the stage into a maddening prancing human crowd. Stagediving, slam-dancing and mosh pits were actually banned by the Singapore authorities in 1993. Ten minutes into the gig, I handed my friend my house keys, spectacles and wallet for safekeeping and I melted into the mosh pit.

Established in 1990 with the playwright Kuo Pao Kun (1939-2002) as its first Artistic Director, the Substation took its name from the venerable colonial era electrical facility at 45 Armenia Street, located within the officially zoned as “Civic District” of museums, galleries and cultural institutions in downtown Singapore. I was not aware of the dynamics then, but it was only at Substation that a former political detainee, playwright, the first Artistic Director of the venue, Kuo Pao Kun met and created artistic possibilities with a new generation of ethnic Malay working class youths. Recalling Kuo’s approachability, band member of Stompin’ Ground, Suhaimi Subandie said, “You have long hair, short hair or no hair, he talked to you the same.  ”I have never met Kuo Pao Kun in person. But through the Substation, he gave me new possibilities and connections.

My experience is probably not isolated. As a converging and germinating site for otherwise fringe artistic and creative activities, the Substation has presented an intellectually fertile ground, especially for Singaporean academia, to find critically meaningful narratives and engagements with artists and social activities. As a platform for countless avant-garde exhibitions, performances and screenings, it has provided a poignant alternative narrative to the scholarly literature on themes relating to Singapore culture and society.

Until the 1990s, mainstream academic perspectives on Singapore society reflected on the postcolonial port-city’s rapid economic development as part of the “Asian economic miracle,” under the premiership of Prime Minister Lee Kuan Yew from 1959 to 1990.  This triumphant sentiment was encapsulated in the collection of more than fifty chapters in Management of Success: The Moulding of Modern Singapore, published in 1989 under the editorship of Kernial Shandu Singh and Paul Wheatley (Singh & Wheatley 1989). Responding to this discourse from a different perspective are non-Singapore based scholars are “soft authoritarian” portraits of Singapore’s as the party state.

It was the Substation and its accompanying activities that another generation of scholars, raised in post-independent Singapore like myself, found possibilities of transcending existing scholarly binaries, critical cultural nuances and resilient communities.

Like the arts, this “Third Space” for Singapore academia can perhaps be attributed to the momentum set out by the vision of Kuo Pao Kun. After his release from political detention, Kuo moved from pursuing direct political criticism to fostering creative diversity. Such possibilities evident in the three decades of the Substation, which started from the age of the fax machine to that of the internet and smartphone.

The incubatory, experimental and liberal spaces that the Substation has provided a multitude of fringe artistic and aesthetic activities, alongside the communities that grew from them, has also been actively mirrored in academic writing. The Substation is relevant to academic enquiry on a wide multidisciplinary spectrum. From semiotics and performance to politics and society, individual creative works and cultural scenes that have occupied the venue inform theoretical discourse and critique across scholarly fields.

Central to academic interest in the Substation are the artistic autonomies and possibilities that it has created within postcolonial Singapore’s highly interventionist, soft authoritarian political climate.  Alongside this political juxtaposition, on the academic radar are the stark contrasts between the cultural autonomy emanating from the non-descript former colonial power-station and architectural showcases like the Esplanade in 2000 and the National Art Gallery in 2015.

Scholarly attention to the Substation is both archival and current, capturing interviews with Kuo Pao Kun in 1993, and memorializing his legacy; reaffirming the site’s uniqueness in the new terminology “Affective Paragrounds”. In addition, several academics have also been actively involved with the establishment and governance of the Substation, most prominent amongst them Professor Tommy Koh, Singapore’s Ambassador-at-large who is the venue’s Patron. The venue’s Artistic Directors like Audrey Wong, Lee Weng Choy, Woon Tien Wei, have either held doctorates in the Arts, been engaged as educators in tertiary institutions or contribute actively to academic publications. Over the decades, in various capacities as speakers and discussants at its public events, the local academic community has also made active intellectual contributions to the Substation.

Although there are investments in arts centres, schools and initiatives in existing universities, their significance to Singapore arts and culture is evidently dwarfed by that of the Substation.  Unlike the former, which are often inconveniently located on university campuses and cater for confined audiences of student communities, the Substation has greater artistic autonomy to serve a more diverse public. As such, especially for the locally based academic community, the Substation provides more exciting platforms for broader public engagement, social interaction and scholarly collaboration and research.

Punk rock gigs have been staged in campuses of universities sporadically over the decades, but organisers, performers and audiences there will always be a place for them at the Substation.  The Singaporean artiste Loo Zihan may be familiar with arts institutions and centres in Singapore. But, it is perhaps only in the Substation that he could comfortably stage the mixed media performance Cane (2012), a re-enactment of the controversial 1994 event in which Joseph Ng in openly cut his pubic hair in a mall, as a symbolic protest against police entrapment of gay men in Singapore. Like the annual Substation Conferences held in the 1990s, the Substation has encouraged substantially critical dialogues involving academics and the arts community.

The Substation’s artistic leaders recognised the value of connecting with the scholarly community. Artistic Director Alan Oei (2015-2020) actively sought closer academic-artistic collaborations. For example, I collaborated with Oei in integrating the Visual Methods Conference held in Singapore in 2017 with a parallel Substation exhibition, Discipline in the City.

As a moderator to the panel “Great Expectations: What Does It Mean To Make and Hold Space for the Arts In Singapore?” in “Space, Spaces, Spacing 2020” (Substation 2020), I had the honour to meet one of the speakers Subhas Nair and his sister Preetips Nair (within the audience). The Nairs were given a police warning several months ago for an “offensive rap video”, in response to a Brownface public advertisement. Unfortunately, that may just be my last academic service to the Substation as it plans to close by July 2021.

Among the local academic community, I am confident that those who have committed to Substation have done so purely as a labour of love, with no expectations of institutional acknowledgment from their universities and schools. On the contrary, some of us ponder what repercussions might follow our commitment to a venue that is associated more with critique than cheerleading.

Jason Lugur included the Substation as one of the few “Spaces of Hope” in his study of Singapore’s cultural landscape. The Substation gave me my foundations as a scholar in Cultural Studies and it has only been right for me to reciprocate in keeping this space of hope alive in my own small ways.  The Substation as we know it may be history. But, in fostering a unique relationship between independent arts and critical scholarship for the past three decades, its significance should not be written as an obituary.  It should remind the academic community, particularly in the Humanities, of its public commitments to arts and culture in Singapore. Through generating critical knowledge from its research, documentation as well as other forms of collaborations with the arts communities, I hope that the academic community will continue its affective missions in finding and serving in new spaces of hope in Singapore.