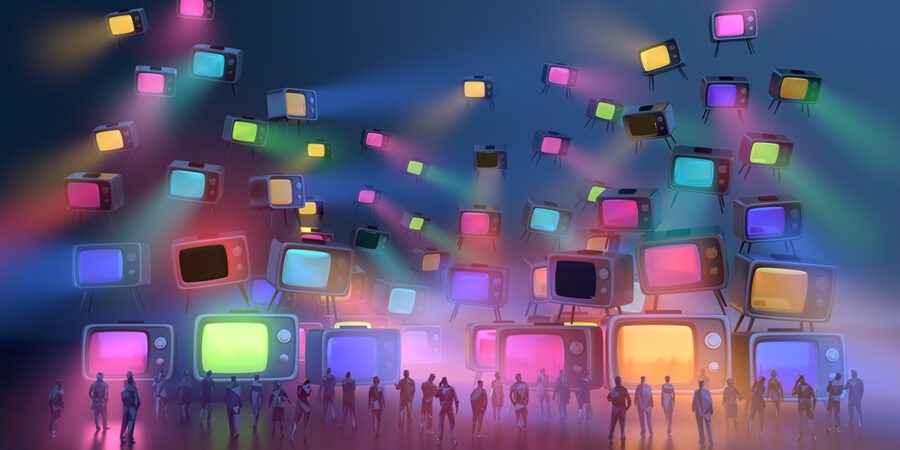 It was one of those uneventful afternoons on the set of the ‘live’ reality TV show where I was an intern. Everyone went about their usual business. Stationed next to the camera director at the front end of the panel room, I sat quietly staring at the dozens of monitors that observed the reality TV show contestants around the clock — Big Brother style. Five metres behind me, the censor on duty conscientiously watched the ‘live’ broadcast on a separate monitor, alert for anything that needed immediate censoring. A woman in her early twenties, she was one of the dozens of part-timers hired at an hourly rate to act as censors for the ‘live’ programme. The instructions given to her when she was hired were simple: blur or mute what you deem problematic, and record anything you censored in a logbook. Outside the panel room, the production manager monitored our work by watching what the audiences would see — the post-censored ‘live’ broadcast on television.

The mood in the panel room was relaxed, almost sleepy. The contestants had no designated activities and were free to rest. With nothing in particular on which to focus our attention, I watched on as the camera director switched around the different cameras to capture what the contestants were doing. We stopped at a CCTV view of the girls’ bedroom where two of the female contestants were casually chatting. The microphones picked up a conversation about underwear, during which one of the contestants held up the underwear in question. I thought nothing of it as the shot changed to another room after a couple of moments. The peaceful quiet in the panel room was abruptly broken a few minutes later when the production manager came running in.

‘What did you censor? What happened?’ the production manager yelled as she ran towards the young censor.

‘Oh, erm,’ the young woman faltered, slightly surprised. ‘The contestant held up her underwear, I wasn’t sure whether that was okay, so I blurred it.’

Clearly relieved that nothing serious had actually happened on set, the production manager said, ‘You don’t have to censor that. Don’t do it again in the future, okay?’

The young censor nodded and turned back to the monitors, as everything returned to normal. She quietly fulfilled her duty by writing the incident down in the censor logbook.

‘Underwear’ must have been the trendy topic of that week because another female contestant held up her underwear on screen again two days later during a casual conversation. A different young woman was on duty as censor that day. Following in her predecessor’s footsteps, she blurred the image of the underwear. The production manager again rushed into the panel room to find out what had happened. To her frustration, the censor revealed that she decided to blur the image because she read in the logbook that the previous censor had done the same thing two days ago and so she assumed that was standard protocol.

This was my first ethnography. I had set out to do fieldwork on media production in Singapore following decades of widespread reporting on the country’s authoritarian government’s tough censorship measures. However, this was not what I had expected. My immediate reading of this situation was to attribute the censoring of innocuous content to the inexperience of the censors, which raised questions about why these young censors were hired in the first place. How could an authoritarian state such as Singapore allow part-timers who were barely twenty years old to be responsible for its censoring?

Looking at the inexpert young censors, my second thought was of the assertions I had often encountered over the years about how Singapore is plagued by fear and self-censorship. ‘This must be a symptom of the “fear” that these commentaries and journalistic accounts were referring to,’ I thought to myself. But when I was in the panel room as a member of the production team, I did not actually feel the so-called fear amongst those around me. In fact, the rest of those in the room barely seemed to have noticed anything unusual happening. It occurred to me then that my reading of the situation had been coloured by widely circulated accounts that Singaporeans are fearful of the state.

Underlying the questions I had in my head was, of course, my own assumption that media systems in authoritarian contexts are run in a coercive manner. I imagined that I would find fearful media workers cowering under draconian laws. Instead, I witnessed a plethora of misunderstandings, confused practices and quibbling producers.

This early ethnographic encounter acclimatised me quickly to the realisation that behind the veneer of a censorious illiberal state media are intersecting and rather complex practices that cannot simply be encompassed under broad claims of state power, fear or self-censorship.

As scholars such as Cherian George have discussed, the maintenance of an illiberal state’s ideological legitimacy necessitates that it maintains at least some distance from its mainstream media. Echoing that, I actually felt very little state presence throughout my ethnographic fieldwork in Singapore’s various media production companies.

Furthermore, the producers I worked with mostly saw themselves as creatives rather than tools of the state. While the vast majority of Singapore’s mainstream media still relies to some degree on state funding and is therefore expected to do so-called public service work, the Singaporean government’s privatising of the state-linked broadcaster, MediaCorp, also subjects media producers to the capitalist forces of the free market. As a result of the industry structure, Singaporean media producers are subjected to the disciplinary forces of both the state and the market.

So, if there is limited state presence in everyday production work and media producers serve a complex combination of creative, state and market agendas, how is authoritarian resilience sustained in Singapore’s media?

A common explanation of how producers negotiate the complex state-media-politics nexus has been through the concept of ‘OB Markers’, a term unique to Singapore that refers to topics that are deemed ‘out of bounds’ or too sensitive for coverage in the media. This framing of producers as self-censoring in line with state directives or coercion is more complex in practice. Departing from a state focus and turning to the everyday practices of media producers residing at the awkward intersection between the state and the people, I offer an alternative account of the puzzle of authoritarian resilience in Singapore’s media.

In navigating their multiple responsibilities as representatives of the state and public service providers, as well as commercial entertainment producers, media producers in Singapore transfer many of the contradictions and tensions inherent to these different expectations to the figure of ‘the audience’ in their daily work. In other words, imagined audiences function as the key source of anxiety, policing and potential punishment for media producers in Singapore. I argue  that the central figure of ‘the audience’ is the key piece of the puzzle of authoritarian resilience in Singapore’s media.

The state makes this possible, of course. In doing the state’s ideological work, media producers are expected to ignore social difference and articulate a shared value system in the name of consensus. At the same time, the Singaporean government’s brand of conservatism, where policymakers repeatedly defer to what they call Singapore’s conservative majority as justification, has resulted in intolerance towards diversity of opinion and a culture where complaints are taken extremely seriously. Think, for instance, how quickly the Housing & Development Board (HDB) altered their graphic promoting their Home Improvement Programme after what appeared to be only a small number of negative comments on their Facebook page.

In practice, this means media producers in Singapore face the behemoth task of addressing their audiences as some sort of Singaporean ‘mass’, while coping with individual departures from that so-called ‘mass’. This could be through trying to avoid any instances of individuals taking offence or being responsible for viewer complaints.

For media producers in Singapore, complaints manifest in various ways; they could be filed directly with MediaCorp, with the authorities, or merely through social media comments. These methods of complaint delivery are situated within a broader culture of people using complaints to control behaviour in Singapore, frequently through filing police reports. Such mechanisms of escalation are used not only by the public but also ministries and politicians. This common practice of using complaints to police others can easily be abused, especially if done anonymously, further adding to a generalized anxiety about any comments that could be broadly construed as negative. This makes those at whom the complaints are levelled very vulnerable.

Media producers’ vulnerability is also exacerbated by industry mechanisms. As industry insiders have explained to me, the Infocomm Media Development Authority (IMDA) has so far been highly responsive in starting investigations, sometimes just based on one or two complaints or online comments. IMDA’s complaints-driven mode of operation means that any such complaint or opinion voiced publicly could result in potential punishment for both the producers and the broadcaster. Punishments could range from monetary fines to internal disciplinary action and potential criminal charges.

In essence, this industry mechanism works as a way for the Singaporean state to outsource the responsibility of policing social pluralism to media producers. The need to predict and control viewer responses places Singaporean media workers in a passive and reactive position when anticipating potential issues with their work.

A political climate where potentially anyone has the power to provoke disciplinary action against producers, even if unintentionally, results in a work culture where anticipatory paranoia about viewer complaints features heavily in everyday production situations.

This has implications for the way we think about media production in Singapore. When making media, producers’ practices are not just shaped by broad ‘social norms’ or ‘OB markers’. In addition, producers’ conduct is also modulated by sometimes random and unpredictable viewer complaints. In other words, producers increasingly act based on individual instances of audience complaints as compared to broader societal standards.

If producers have to change their decisions depending on whoever complains on specific occasions and on specific platforms, the relational nature of this power relationship then makes the distinction between ‘right’ and ‘wrong’ conduct increasingly blurry. This injects uncertainty to the core of media production in Singapore.

To cope with these anxieties, the media producers I worked with constantly invoked ideas of audiences that engendered self-policing in their daily work. This then reproduces a vicious cycle of self-perpetuating fear. I show ethnographically how this central figure of the imagined audience tended to perpetuate the status quo (social or political) in the absence of state directives in media work.

If, as I argue in my book, Performing Fear in Television Production, audiences function as the central problematic that engenders anxieties and self-policing amongst producers, has the audience become a surrogate for the authoritarian state?

Performing Fear in Television Production: Practices of an Illiberal Democracy can be purchased via the publisher’s website or on other major platforms. You can read a preview of it here. The NUS Asia Research Institute is hosting a book discussion on 7 March.