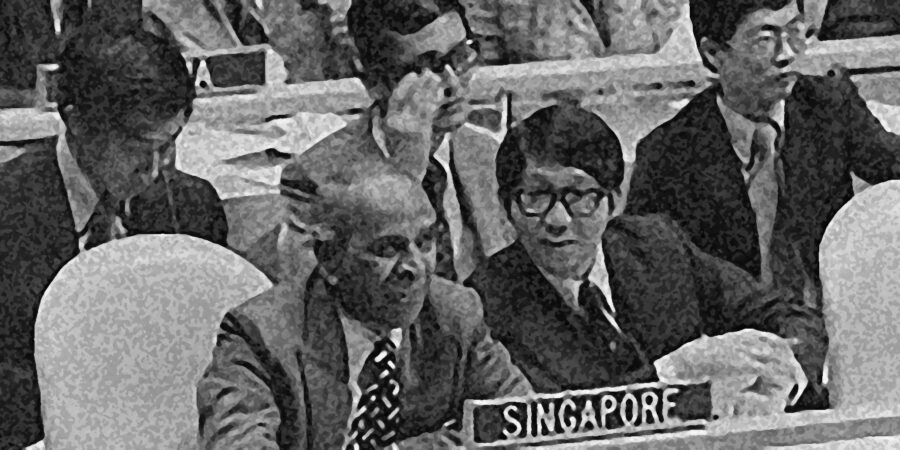 Behind the Singapore government’s unequivocal condemnation of the Russian invasion, some citizens are dismissive of Ukraine’s plight. Such reactions betray an amnesia about the foundations of Singapore’s own sovereignty, writes Cherian George of Hong Kong Baptist University.

No country’s borders are perfectly coterminous with racial, linguistic, religious or other cultural dividing lines. They are what might be called a social construct, though this has not stopped peoples from treating their borders as very real.

Singapore is an extreme case. Not even the leaders of our anti-colonial movement claimed that Singapore made any sense as a sovereign city-state separate from the Malaya of which it was an organic part. As our nation-builders are fond of putting it, Singaporeans’ oneness is an act of will and not preordained. Today, that will is strong. Singaporeans affirm the sanctity of our republic’s borders with a conviction that is almost religious.

Given our country’s origin story, you would expect Singaporeans to side with any country whose borders are violated by a larger neighbour that wants to wipe it off the map. The uniquely improbable, accidental nature of Singapore’s statehood should predispose Singaporeans — more than most peoples — to oppose a bully anywhere who tries to use history or culture to negate its neighbour’s right to self-determination.

In 1965, our willpower would have counted for little had there been no global norms enabling nations to establish their sovereignty. When foreign minister S. Rajaratnam expressed Singapore’s gratitude to the United Nations for admitting the new republic as a member, he promised that Singapore would, in turn, give “loyal and unflinching support” to the UN’s ideals, including “safeguarding of the inalienable right of every country to establish forms of government in accordance with the wishes of its own people” and “resolving differences between nations through peaceful negotiations, not by violent means”.

You’d expect today’s Singaporeans to remain strong believers in international laws requiring mutual recognition of nations’ right to exist, no matter how improbable they appear to others or even to themselves.

The Singapore government’s objection to Russia’s invasion of Ukraine — among the firmest official statements from faraway nations — is thus entirely in keeping with who we are and how we got here as a country.

The same cannot be said of the dissonant reactions of many other Singaporeans, expressed in private conversations and publicly on social media. There are no published opinion polls to quantify these observations, but the anecdotal evidence is disconcerting. Within hours of Russia’s military assault, friends in Singapore were forwarding me, in disbelief, comments from acquaintances showing little empathy for Ukraine’s plight.

While the government has condemned Russia’s guiding logic of “might is right”, some Singaporeans seem to be saying to the Ukrainians, might is might, so why fight?

There are also those who feel Ukraine should have known better than to decide its foreign relations independently when it has a possessive godfather next door with a population three times as large. They overlook the fact that we Singaporeans insist on our sovereign right to write our own foreign policy too, despite being one-fiftieth (not a fifth, a fiftieth) the size of our neighbours.

Other Singaporeans are propagating whataboutisms. What about imperialist America? It is no less of a bully than Russia and has no right to criticise, they say. Some seem to believe two wrongs make a right: their observations about American abuses are coupled with open admiration for Putin.

Such viewpoints are not unique to Singapore of course. Although only five countries (Russia, Belarus, North Korea, Eritrea and Syria) opposed the UN General Assembly resolution demanding that Russia get out of Ukraine immediately, global public opinion is more split than that. But the circulation of pro-Russian views in Singapore is especially jarring given the country’s status as a small state heavily reliant on the international laws and norms into which our republic was born.

What explains these attitudes? On Thursday I’ll be discussing this and related questions with a panel of fellow social scientists.

I expect the conversation to be highly illuminating. In the meantime, though, let me offer some preliminary thoughts about factors that may lie beneath these reactions.

Malign foreign influence is clearly one. China’s hypernationalist propaganda, both official and ground-up from its “little pinks”, has been circulating in Singapore’s information space for a while. Most of this does not sell China directly, the way tourism or investment marketing would. China’s external mouthpieces — and, even more so, Russia’s — devote most of their time to undermining the US and Europe by harvesting the low-hanging fruit of Western failures and hypocrisies.

As Big Tobacco and Big Energy knew even before the Russian and Chinese states, if you already have power and money on your side, you don’t actually need to convince audiences that you are right; it is enough to seed public opinion with doubt and confusion, thus paralysing democracies’ attempts to mobilise a concerted response to the threat you pose.

Many Singaporeans seem to be aware that they are helping to circulate Russian and Chinese propaganda, but justify their generosity by saying that they are just trying to level a field dominated by pro-Western players. It is of course true that American and Ukrainian propaganda is also in overdrive. One needs to be sceptical of news reports whatever their source.

But context matters. When a major power launches a devastating war under false pretences, as the US did against Iraq in 2003 and Russia is doing now, we should be especially wary of the aggressor’s propaganda efforts. In the midst of a humanitarian crisis, the searingly simple question is how to save lives today and avoid more bloodshed tomorrow. The question of who’s worse, America, China or Russia, may be good for class debates and coffeeshop talk, but such faux intellectualism shouldn’t obscure what needs to be done right now.

A second force at work, though, militates against principled positions and reasoned debate. We are in a global age of angry identity politics, and Singapore is not immune. Highly polarised publics choose what to believe and support based less on what is said and done than on who is saying and doing it.

Many Singaporeans view the Ukraine crisis in the light of the geopolitical conflict between the US and China, about which there is a range of impassioned views. Even experts in America agree that too many opinion leaders there are unnecessarily provoking and isolating China with their Cold War rhetoric. Such clear signs that the US is unwilling to accept an Asian giant’s rise is bound to rankle Singaporeans and colour their perceptions of Western responses to the Ukraine crisis.

While race probably plays a part, antipathy towards the West is not confined to Singaporeans who feel kinship with China. The injustices of a global order dominated by the United States are plain to see. Singaporeans are hardly losers in this game, however. We have benefited greatly from Pax Americana, overtaking the United States in the UN’s human development index more than a decade ago. But perhaps this has only compounded an enduring sense of resentment, since achieving success by Western standards has not spared Asians from Western condescension.

The People’s Action Party stance towards the West reflects this tension. On the one hand, PAP policies since independence have focused on keeping Singapore in sync with the demands of the Western-dominated global capitalist order. On the other hand, decades of PAP rhetoric have criticised the West in terms that are almost identical to current Chinese propaganda. It is not surprising that China’s talking points land on fertile ground when they reach Singapore.

Displaced siblings who fled the conflict in Yemen. Although the UN described it as the world’s largest humanitarian crisis, the war in Yemen did not dominate the news the way Ukraine is, prompting accusations of racial prejudice. – UNHCR photo.

There is a third possible reason for some Singaporeans’ unsympathetic response to Ukraine’s plight. It may be rooted in an unstated belief that Singaporeans deserve their security more than other peoples. Commentators have correctly critiqued the prejudices on display in international media responses to the war in Ukraine. Some correspondents and columnists talk as if bad things that happen to a white, developed country warrant more shock and outrage than wars that afflict brown and black peoples in poorer places, like the civilians in Tigray and Yemen who are on the brink of famine, or the half a million dead in Syria. Perhaps, to some Singaporeans, Ukrainians too belong in the category of forgettable people.

Singaporean academics Teo You Yenn, Donald Low and Kenneth Paul Tan have all written about how the country’s ideology of meritocracy may have spawned a sense of entitlement among the successful, seeing people who are less well-off as getting their just desserts, rather than burdened by structural disadvantages that we have a moral obligation to address.

Perhaps our view of the wider world is warped by this same Singaporean hubris, as if the peace and stability we enjoy is all thanks to our own efforts, while countries beset by the dogs of war could have spared themselves the trouble if only they were more like us.

— Cherian George is Professor of Media Studies and Associate Dean (Research and Development) at Hong Kong Baptist University’s School of Communication and Film.