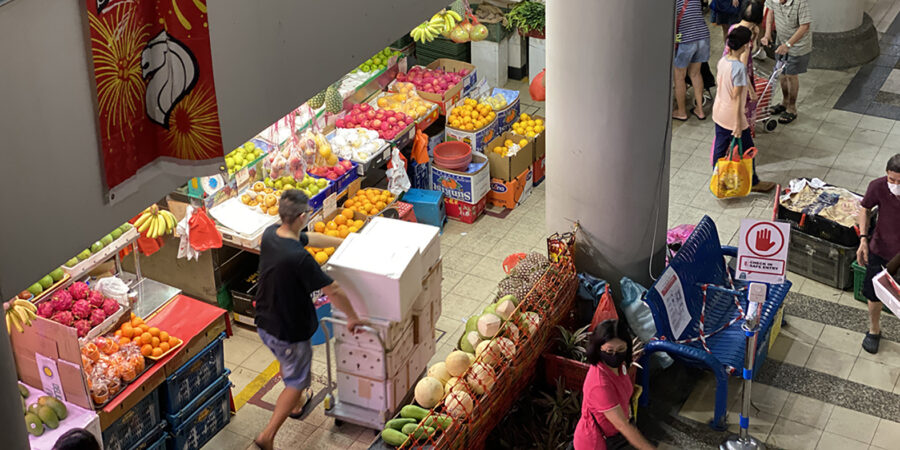 The public discourse on inflation in Singapore has focused on imported inflation, and its mitigation through currency appreciation. But there are also domestic sources of inflation rooted in our overall economic development strategy, argue economists Linda Lim and Nigel Chiang of the University of Michigan.1

One year ago, central bankers worldwide mostly expected rising inflation to be “transitory”, decelerating as pandemic-induced pent-up demand receded and supply disruptions eased. Instead, inflation has accelerated, due in part to the emergence of new COVID variants leading to prolonged pandemic restrictions, particularly China’s severe lockdowns, and the war in Ukraine, plus climate change-induced droughts and floods that pushed up food and energy prices.  Tighter border controls during the pandemic also reduced international migration flows, contributing to labor shortages.

In the U.S. and other advanced economies with ageing populations, labor shortages have also been worsened by post-pandemic drops in labor force participation from early retirements, inadequate childcare, increased wealth (from rising housing values and stock portfolios), and high savings (partly the result of generous Covid-era state income support).  This pushes up wages, threatening a wage-price spiral as employers seek to pass rising costs on to consumers.

On the demand side, central bankers continued with monetary stimulus (low interest rates and quantitative easing) for too long, aggravating the problem of excess demand — or “too much money chasing too few goods/resources”. Most are now tightening monetary policy, by raising interest rates to make borrowing more expensive, and thus reduce consumption and investment demand.

Central banks do not control fiscal policy — government taxation and expenditure — which also has an impact on domestic demand.  This is the purview of elected legislatures which are understandably reluctant to undertake fiscal tightening — raising taxes and cutting government spending to reduce inflation by reducing demand — since this is politically unpopular, and risks precipitating or aggravating anticipated recessions.

Also, structural policies to increase supply — for example, by removing infrastructural bottlenecks and increasing labour force participation — themselves involve increased spending and could thus contribute to inflation in the short term while increasing supply only in the longer term.

As a small, extremely open economy, Singapore is heavily exposed to these global forces. Monetary policy tightening by the Monetary Authority of Singapore (MAS) involves strengthening the exchange rate, which curbs inflation by reducing the price of imported goods — particularly food and energy — in local currency terms.

But in Singapore, the exchange rate is also a domestic policy variable, managed to preserve export competitiveness and the government’s longstanding economic development strategy that is heavily premised on attracting large foreign capital inflows to produce goods and services for a global market.

In a market-determined floating or flexible exchange rate system, strong capital inflows (meaning strong foreign demand for the local currency) will cause the currency to automatically rise, thus choking off new inflows and holding down imported inflation (since imports denominated in foreign currencies will cost less in local currency terms).

In Singapore, this cannot happen because the exchange rate is managed by MAS, which typically sells the Sing dollar to weaken it, such that it is undervalued by various international measures.  One measure used by the International Monetary Fund (IMF) puts the undervaluation at 14 percent in real terms, while The Economist’s Big Mac Index, based on the principle of “purchasing power parity” — the idea that exchange rates should over time converge with the rate that would equalize the price of goods and services across countries — indicates undervaluation of 17.7 percent against the US Dollar in June 2022.2

This has been true for decades, as reflected in Singapore’s persistently large current account surpluses (excess of exports over imports), since the currency cannot rise sufficiently to eliminate the export surplus, and in our ever-expanding external reserves.  According to the IMF, our current account surplus is between 3.4 to 7.0 percentage points of GDP too big given our economic fundamentals — a staggering figure. Hence the U.S. Treasury’s regular grumbling about our “persistent, one-sided intervention in the foreign exchange market.”3

An undervalued currency feeds inflation by increasing the local price of imports. This did not matter so long as import prices were themselves stable or declining in foreign currency terms, as they were in the past decade of low global inflation and even disinflationary pressures. Today, with global inflation likely to persist (unless excess demand is suppressed by a severe recession), an undervalued currency is a liability especially in a small open economy heavily dependent on imported inputs and commodities. Hence, MAS’ current effort to strengthen the currency.

The sustained large foreign capital inflows that are key to Singapore’s development strategy put upward pressure on the exchange rate–working in line with MAS’s aim to reduce imported inflation. But they also add to domestic excess demand that aggravates inflation.  Recent large new investments by multinational companies and the rapid growth in family offices have contributed to skyrocketing commercial, industrial and residential rents, transport and other domestic costs (Charts 1 and 2).

Coming off a decade-long high of S$17.2 bn in fixed asset investment (FAI) commitments by multinationals in 2020, 2021 saw another $11.8bn in FAI commitments.  2022 is shaping up to be another bumper year, with the mid-year tally already within the Economic Development Board’s medium- to long-term annual FAI target range.

Another driver of excess demand is the surge in Singapore’s family office count, from about 80 in 2017 to about 400 at end-2020 and 700 at end-2021.  In exchange for government investment incentives, including automatic permanent residence for the principals of family offices and their family members, foreign investors are required to invest a certain amount of their money locally.

Given the scarcity or even absence of local talent in specific technologies and business functions, investors must compete with each other by raising salaries.  They also need to import foreign employees, many with specialized skills, who need places to live, schools for their children, transportation and so on.

Indeed, the IMF in its latest analysis finds that:

The value of foreign transactions spiked since the pandemic up until Q1 2022 at a much faster pace than that of resident transactions over the same period. Throughout the pandemic, a greater share of non-resident buyers relative to residents continued to pay higher prices by market segments, under both measures of $per square foot (PSF) and total property value, suggesting that non-resident demand continued to play a key role in setting property prices.4

Meanwhile, job vacancy rates in the IT and information services, professional services and financial services sectors — the primary recipients of these inflows — have spiked to record highs and are meaningfully elevated compared to the broader services sector (Chart 3).

All this raises rents and wages, which in turn increases production costs, particularly in the services sector which has a higher domestic content than export-oriented manufacturing — and so is more affected by rent and wage inflation.

Not all the inflation overshoot is attributable to excess demand from capital inflows. Non-resident employment in Singapore plummeted during the pandemic and has not fully recovered, with resultant delays in construction, for example, causing residential prices and rentals to jump.  Some of this frictional inflation will abate over time, but not if final demand continues to grow rapidly.  The government has for over a decade emphasized that it wishes to reduce the labor-intensity and foreign-labor-dependence of the economy — which are extraordinarily high for an advanced economy.5 The mounting physical, economic, social, environmental, political, geopolitical, security, stability and health risks and constraints such overdependence entails suggests that it is not likely to back away from this elusive goal.

On the fiscal policy front, the government will be raising taxes through GST increases planned for 2023 and 2024.  Given the prevalence of excess demand, the GST hike is likely to induce businesses to more readily pass on their accumulated costs to consumers, thus raising prices and exacerbating inflation in the short term.

Whatever its other goals, from a macroeconomic rebalancing perspective, the GST increase should eventually reduce excess demand, as consumers faced with higher prices cut back on their spending.  But the impact on dampening down inflation is partially offset by the increase in government expenditure on subsidies to help lower-income consumers maintain their consumption, and hence, domestic demand.

Budget 2022 announced a S$560mn Household Support Package to help Singaporeans cope with the rising costs of living and a S$500mn Jobs and Business Support Package to cushion small businesses from the pain, and support hiring of locals. In June, the government announced an additional S$1.5bn support package to provide more relief for vulnerable households and businesses.

A more efficient and equitable way to employ contractionary fiscal policy — reducing demand to cool off inflation — is to raise taxes on corporations and high-income earners.  The latter include highly skilled Singaporeans who are the main local beneficiaries of the high-wage jobs generated by excess demand, which also imposes the negative externality of inflation on their lower-income compatriots.

However, this undermines the economic strategy of attracting foreign capital and talent to generate economic growth through low taxes and government spending on investment incentives like infrastructural subsidies.

Solving Singapore’s inflation predicament beyond the short term thus requires grappling with the structural underpinnings of an export-oriented multinational-led development strategy which has baked in an inflationary bias into the economy. An undervalued exchange rate, and excess demand from large foreign capital and talent inflows, will otherwise continue to push up domestic costs in a severely resource-constrained economy, even after post-pandemic global inflationary pressures moderate.

But its contribution to inflation is not the only reason to re-evaluate Singapore’s development strategy.  Favoring — or just relying so heavily on — foreign capital and talent, including through family offices, also worsens wealth and income inequality, and exacerbates the foreign-local divide, while excess demand — such as for scarce land and labor — crowds out local entrepreneurs and small-and-medium enterprises, and intensifies environmental pressures.  It also risks undermining national resilience and security.

Finally, a strategy based on low taxes and subsidies for corporations and the wealthy is also increasingly untenable in an international economic policy environment that is growing ever more intolerant of beggar-my-neighbor policies and “unfair competition”.

Linda Lim is professor emerita of corporate strategy and international business and Nigel Chiang is an MBA candidate, both at the Stephen M. Ross School of Business, University of Michigan. Nigel was formerly a private sector economist in Singapore.

1. The views expressed here are those of the authors and do not reflect the views of any institution they are affiliated with.