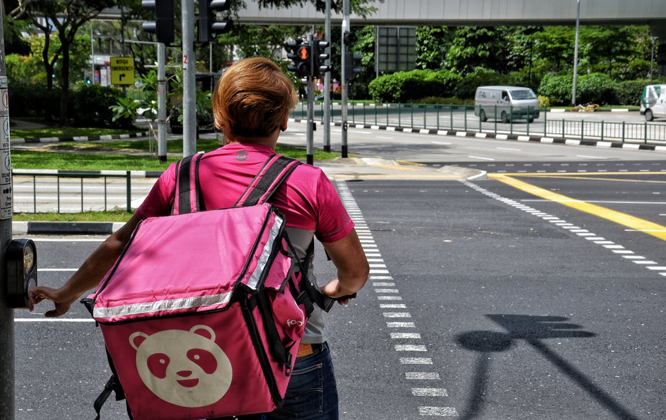 Independent researcher Dr Stephanie Chok asks: if gig work and other non-standard forms of employment are an integral and growing part of our economy, what are our shared political responsibilities in ensuring that it delivers fairer returns?

Beyond Social Services’ February 2021 report, Mind the Chasm: COVID-19 and Deepening Inequalities in Singapore, reveals the pandemic’s devastating impacts on 1,231 low-income families who had applied for Beyond’s COVID-19 Family Assistance Fund (FAF) between April and September 2020. The crisis saw steep declines in median household income from work and median per capita income from work (69% (Figure 1) and 74% (Figure 2) respectively).

The majority of FAF applicants and their family members, who were situated in the bottom 20% nationally in terms of household income, were engaged in low-paid and precarious forms of work. They were concentrated in the service and security sectors, as well as the gig economy. Common occupations included cleaners, security officers, F&B workers, retail assistants and delivery riders, among others.

The economic impacts of the pandemic were especially severe for these groups because of the nature of their work (which did not allow them to work from home), the industries they were concentrated in (which were especially hard-hit by ‘circuit breaker’ measures), and the types of employment relationships they were in. Many were engaged in what the International Labour Organization (ILO) terms non-standard forms of employment (NSFE) (Figure 3), which includes part-time and temporary work, subcontracted work, work with variable and non-guaranteed hours, and dependent self-employment (gig work) (Rubery et al, 2018).

Multiple forms of labour insecurity are a key feature of NSFE—including job insecurity, income insecurity, working time insecurity (Watson et al, 2003) and a lack of substantive social protections (Rubery et al, 2018). During the pandemic, the lack of benefits such as paid sick leave or paid childcare leave was especially stressful for FAF applicants. Some had to forego wages—or jobs—to care for children when schools or childcare centres closed, and when they or their family members fell sick. Medical responses to the pandemic had practical consequences for these workers: medical practitioners have been (and are) urging those with any respiratory symptoms (not just fever but also cough, sore throat, or a runny nose) to seek medical attention, resulting in COVID-19 testing and the issue of compulsory medical certificates that require one to stay at home pending test results. This has affected low-paid workers who are unable to claim for medical expenses, who are only paid when they show up for work or fulfil certain work targets, and who face disapproval or potential dismissal if they take too much time off work (regardless of the reason).

The ILO emphasises that paid sick leave is a core pillar of social protection for workers and includes two components: “leave from work due to sickness and cash benefits that replace the wage during the time of sick leave”. This is not the case for those engaged in NSFE, for whom difficult trade-offs arise when their health or the health of their family members are compromised, and for whom care gaps were exacerbated during the crisis. In addition to a lack of paid sick leave, FAF applicants who had to report to work had to grapple with the anxiety of working in the midst of a pandemic health experts were still trying to fully understand, but which was known to be highly infectious.

The ILO places gig economy workers in the category of “disguised employment” or “dependent self-employment”, that is, employment which “lends an appearance … different from the underlying reality, with the intention of nullifying or attenuating the protection afforded to workers by law”. Companies refer to gig workers they hire as “self-employed independent contractors”, but this controversial label faces increasing legal scrutiny. Some deride it as “sham self-employment”, for it disguises the risks involved in the work (disproportionately borne by individual workers), and the way algorithmically managed work severely constrains delivery workers’ autonomy and choices (Gregory, 2020).

A surge of people signed up to be delivery riders in Singapore in 2020. In April 2020, Deliveroo added an additional 1,000 riders to its fleet, leading to a total of 7,000 riders, with another 2,000 hires expected by end June 2020. Grab reported an 80% increase in applications to be a Grab delivery rider from March 2020, but did not reveal the total number of riders it hired. Foodpanda had more than 8,000 riders in April 2020.

The delivery riders among FAF applicants reported increased competition—due to the many new sign-ups, as well as private car-hire drivers also taking on food delivery work—and thus shrinking earnings. As delivery work is paid per completed delivery, many reported spending similar or longer hours on the road, but with much less earnings. Riders are not paid for the time spent waiting—for orders, or for food preparation—but are under constant surveillance and pressure to meet performance targets and consumer expectations. In their study on food delivery riders in Australia, Goods et al point out that while the temporal flexibility gig work offers is often viewed positively, the labour process continues to be tightly controlled by food delivery platforms. Gig workers are subject to constant changes in pay rates and fees, and are essentially “price takers with no discretion over pay setting”. The flexibility draw of gig work, under these conditions—low pay, fluctuating demand, increased competition, constant performance tracking—starts to resemble “on demand work”, in which “there’s no flexibility—you have to work when there’s demand”.

On top of the increased risks of infection through multiple face-to-face interactions a day, delivery riders also risk physical harm (road accidents are a common hazard) and incur costs in purchasing and servicing their vehicles. Their self-employed status means they are not covered under the Work Injury and Compensation Act.

As on-demand delivery platforms employ more workers, it is imperative to evaluate how this burgeoning group of workers and the companies that hire them should be treated. The current business model shifts risk burdens primarily to workers, who are characterised as self-employed contractors but are subject to a level of control and surveillance by platforms that challenge the autonomy this label suggests. Many FAF applicants are part of the gig economy and some voiced concerns over changes in algorithms that have negatively impacted their pay. This aligns with a growing global collective of gig economy workers dissatisfied at becoming “algorithm slaves”.

On 19 February 2021, significantly, the UK Supreme Court ruled that Uber drivers should be treated as workers rather than self-employed persons. Drivers could now be entitled to minimum wages and holiday pay as a result. In the court’s view, Uber drivers occupied “a position of subordination to Uber”, who unilaterally set fares and contractual terms, monitor drivers’ performances, including imposing penalties.

This ruling has wider implications for other gig economy workers in the UK and beyond, including couriers and delivery riders. Tom Vickers, a sociology lecturer in the UK, has pointed out that the ruling focused on “the control that companies exercise over people’s labour—this control also carries with it responsibilities for their conditions and wellbeing”. As other countries and gig worker collectives continue to scrutinise and challenge deterioration in income and working conditions, Singapore, too, needs to deliberate over how to make pay and conditions more equitable for gig economy workers, and the regulatory configurations that may be necessary for this to be achieved. For instance, Goods et al consider the creation of a “hybrid, ‘third category’” for delivery riders, in which they are “dependent contractors” but with strengthened protections and rules governing their work arrangements. These deliberations must be guided by rights-based frameworks that include workers’ voices, and adopt a socio-political lens in assessing platform-based work and its impacts.

If 2020 was the year we collectively recognised the value of essential workers, 2021 should see that appreciation manifest in concrete ways: improvements in wages and working conditions, access to recourse mechanisms, empowerment of workers’ voices, and increased social protection. Currently, there has been an emphasis on job creation in quantitative terms, i.e. the number of jobs created. For instance, the recently announced Budget 2021 measures include the SGUnited Jobs and Skills Package, anticipated to support the hiring of 200,000 locals and provide 35,000 traineeships and training opportunities in the coming year. What is less clear are the types of jobs being created, the wages and working conditions that accompany them, and the nature of the employment relationships offered. In other words, the discourse surrounding job creation lacks disclosure and debate over aspects of job quality which may, perhaps, be deemed a lesser priority in a climate where unemployment is an increasing concern. However, employment can only be a means to lift people out of poverty if decent work is ensured: with adequate earnings, job security, fair treatment, and safe working conditions (ILO, 2019).

While government transfers are reportedly slanted towards lower-income groups, purportedly reducing our Gini coefficient, these monetary transfers tell a partial story. There is inadequate data on wealth inequality (Ng, 2018), and, internationally, Singapore ranks poorly on commitment to reduce inequality in terms of social spending, progressive taxation, and protecting labour rights (Martin et al, 2020). Recent measures, such as the abrupt petrol hikes (which delivery riders and drivers have “baulked” at) and impending GST increases, are likely to further negatively impact lower-income households.

The “emerging stronger” mantra remains unconvincing if policy measures deepen income and labour market inequalities, and potentially diminish job quality for significant numbers of workers. A stronger Singapore should necessarily be fairer and less unequal. The chasm exposed by COVID-19 demands acknowledgement of structural inequities embedded in our economic system that enable exploitative labour conditions to persist. The precariousness and financial hardships experienced by low-paid workers existed pre-crisis, were exacerbated during the pandemic, and will likely worsen. Being “in this together” means recognising our shared political responsibilities in ensuring everyone is able to meet their basic needs and have their rights respected, and in supporting and demanding social, economic and political conditions that enable all to thrive.

Dr Stephanie Chok is an independent researcher who received her PhD from Murdoch University, Western Australia. Her PhD focused on the precariousness of low-paid temporary migrant workers in Singapore, and the thesis was runner-up in the 2015 Asian Studies Association of Australia President’s Prize for Best Thesis on Asia. For the last 10 years, she has volunteered and worked in non-governmental organisations and been involved in multiple research and advocacy projects, including authoring research reports on wage theft, forced labour, and the wellbeing of conservancy workers. She is currently working on research projects related to inequality and food insecurity.

About Beyond Social Services

Beyond Social Services is a community development agency dedicated to helping children and youths from less privileged backgrounds break away from the poverty cycle. The organisation’s current reach extends to 64 rental housing blocks spread out over 14 neighbourhoods, involving 3,029 families and a total of 11,710 persons.

AFP. “Gig Economy Workers Around the World Say They Can No Longer Survive.” The Straits Times, 28 December 2020.

Gregory, Karen. “‘My Life is More Valuable Than This’: Understanding Risk Among On-Demand Food Couriers in Edinburgh.” Work, Employment and Society (2020): 1–16.

International Labour Organization. “The Working Poor, Or How a Job Is No Guarantee of Decent Living Conditions.” April 2019.

Rubery, Jill, Damian Grimshaw, Arjan Keizer and Mathew Johnson. “Challenges and Contradictions in the ‘Normalising’ of Precarious Work.” Work, Employment and Society 32, no.3 (2018): 509–527.