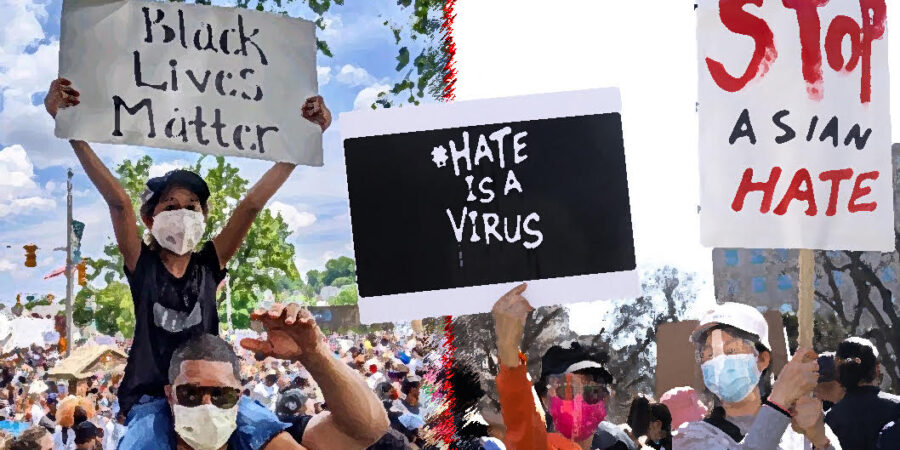 Chong Ja Ian, Associate Professor in the Department of Political Science of NUS, considers the media response to recent incidents of racial discrimination, particularly discussions of Critical Race Theory, and how to build greater understanding and empathy. All opinions are the author’s own. This piece is a translation of a Mandarin version published by AcademiaSG on 15 June 2021.

Singapore has seen a series of discriminatory incidents targeting ethnic minorities in the past few weeks. Among the responses from the public, media, and even politicians, came an editorial published by Singapore’s main Mandarin broadsheet, Lianhe Zaobao, on 9 June 2021, titled “Broadening Public Space, Promoting Racial Harmony”. The piece places responsibility for this recent spate of incidents on “contradictions, even hatred” resulting from “xenophobia”, “frustration”, and the common use of “baiting” on social media. It also blamed the public for “parroting locally ‘Critical Race Theory”, which is in practice a new racism promoting the hatred of white people”. The editorial seemed to only briefly touch on the daily lived experiences of minorities in Singapore and the discrimination they face.

A group of young scholars in Singapore has penned an open letter in response. (Full disclosure: I am a signatory, but neither initiated nor drafted it.) This letter highlighted that not only did the editorial misunderstand Critical Race Theory, it used language that seemed to parallel that of the U.S. extreme right, while overlooking structural injustice and the multiple challenges faced by minorities in Singapore because of who they are. The point of the open letter was not to seek any apology or to apportion “collective blame”. Rather, it hoped for more reflection in society and more active engagement to deepen mutual understanding and advance inter-ethnic relations. Such an important and influential issue particularly deserves thought to enable the development of more a comprehensive perspective.

Simply put, Critical Race Theory is an intellectual movement that developed from the US, based largely on the experiences of African Americans. It explores how the discrimination and unfair treatment caused by racism embedded in legal, social, and political structures, extends, consolidates, maintains, and even deepens the disadvantages minorities face. The legacies of slavery and “Jim Crow Laws” continue to burden African Americans. The existence of these structures allows white Americans to enjoy greater privilege compared to other ethnic groups.

A common translation of the word “privilege” in Sinophone languages is “special rights” rather than “advantage”. The analyses broadly put forward by Critical Race Theory have many influences, including legal realism, post-modernism, and Marxism. The focus is on structure, not individuals, much less the promotion of hatred towards white persons. Among the intellectuals behind Critical Race Theory is Okinawan American Mari Matsuda.

Critical Race Theory is not without limitations. Its starting point is, after all, American society, politics, and law. These specific conditions are not entirely replicable in other contexts. Critical Race Theory nevertheless provides analyses of the power and privilege behind social structures, as well as incisive observations of injustice, that can be applied to different settings. The racist incidents that led to the “Stop AAPI (Asian American Pacific Islander) Hate” movement in the US are likewise rooted in some believing that slandering and attacking minorities does not incur substantial costs under current power structures. This led to direct threats against the physical safety of (East and Southeast) Asian Americans and Pacific Islanders. Recent incidents of racial discrimination in Singapore, including one that resulted in violence, have likewise caused unease among ethnic minorities. Singaporean Chinese American scholar Geraldine Heng has received much attention in academic circles by applying Critical Race Theory to understanding ethnicity in Mediaeval Europe.

Given its history of analysing and critiquing power structures, Critical Race Theory has become a target for the American right wing, including white supremacist groups. Possibly due to fears about loss of privilege and a desire to maintain a perceived status quo, these groups and individuals often depict Critical Race Theory as “hatred towards white people”, dividing society, promoting atheism, and even causing confusion over gender. The intention seems to be to use fear to mobilise conservative white Americans and use inter-ethnic tensions and suspicion to garner votes. Former US President Donald Trump is perhaps the best example of a politician trying to use a caricature of Critical Race Theory in an election.

Singapore does not have a history of slavery or “Jim Crow Laws”, nor does it have the same racial hatred seen in some contexts. Yet racial discrimination, injustice, and prejudice targeting minorities remains around us. We see potential landlords refusing rentals because of skin colour; prospective employers turning people away due to race or religion; people telling children that minorities will kidnap them; people mocked in school and at workplaces for how they look; harassment of inter-racial couples. These are examples of the casual racism and discrimination that ethnic minorities face daily in Singapore. These experiences parallel the unfair treatment that ethnic Chinese in Singapore remember receiving under colonial rule.

Perhaps some will advise others “not to be so sensitive”, “just bear with it”, “this is an isolated case”, “the actions of a minority are unrepresentative”, or “these issues are too sensitive, best not raise them”. Ignoring such incidents and allowing them to accumulate, or even pretending that they do not exist, will only increase distance and misunderstanding, becoming fault lines in the face of shocks or pressure. The instances of discrimination evident today are not incidental. Antecedent conditions exist.

Many Singaporeans use the claim that “discrimination exists in every society” to avoid sensitive subjects or gloss over ugly realities, or believe that there was some pristine race policy in the past that requires no reflection or improvement. This lets down our society, damages long-term development, and displays a certain privilege. People able to make such claims have a choice to avoid the consequences of these “sensitivities”, and tend not to have questions of their ethnicity affect their work, living conditions, or cause them to be otherwise marginalised.

Apart from race, experience of discrimination also has to do with wealth, social status, gender, and a range or other factors. Privilege is not a binary, where one person has more when someone else has less. It is intersectional and dependent on the various positions different people inhabit. A person may have more racial privilege than another, but less gender, ethnic, social, or economic privilege. Someone else may see social, economic, gender, and other advantages make up for less racial privilege.

On Chinese privilege in Singapore, this does not mean that ethnic Chinese in Singapore face no difficulties, have not been hurt or do not carry scars. Rather, because of numerical dominance, it becomes easy to overlook the experiences of ethnic minorities, especially the challenges they face. Better appreciating the experiences of ethnic Malay, South Asian, and other groups in Singapore can bring people closer, allow some misunderstandings to dissipate, and reduce tensions.

Ethnic Malay Malay-English bilingual local writer, Alfian Sa’at, observed that the collective sense of loss ethnic Chinese Singaporeans feel at the closure of Chinese schools and Nanyang University, as well as forced relocations, parallels the shared pain Malays feel at the shuttering of Malay vernacular schools and compelled moves from their homes. Alfian’s observations come not only from his own background, but also extended, long-term conversations with people in the ethnic Malay and Chinese communities. Such exchanges enable different ethnic groups to better recognise each other’s memories and sense of hurt, while building mutual trust and greater sensitivity toward each other’s concerns. By working to overcome misunderstandings, prejudice, and suspicions borne out of ignorance, people can seek a path forward together.

Lianhe Zaobao published a piece by Yap Pheng Hui on 13 June 2021, in which Yap pointed to the value of dialogue, providing what is perhaps a useful starting point. After all, strict laws and harsh penalties may discourage more extreme behaviour, but they do not encourage greater reflection about race relations. Seeing examples of punishment may even prompt people to blame discrimination on others, to view such acts as an individual failing or the fault of a small minority. Consequently, discrimination may persist, and incidents of racism may continue despite tougher laws and harsher punishment.

Conversations may not always succeed, they may begin clumsily, but they nonetheless provide the foundations for learning and reflection. Exchange and building mutual trust, as well as developing the shared vocabulary for dialogue and explaining differences in ethnic experiences, may be far more important than rushing for set objectives. Such crucial conversations require an insistence on persistence, consistency, and openness.

The challenges of accommodation in a multi-ethnic society should, of course, not be taken for granted or taken lightly. To find a way to common ground, we need open dialogue based on empathy, tolerance, and sincerity. Over-emphasising harmony and the absence of problems, or insisting on operating behind closed doors, tends to allow people to forget the hard work that goes into building inter-ethnic ties. Having a numerical advantage often leads the majority to neglect the disadvantages and experiences faced by minority groups. Since the challenges majority groups face are often fewer and less acute by comparison, there is an onus on majority groups to make the first move.

At this stage of our nation’s development, active conversations and efforts toward better mutual accommodation are critical. Wearing ethnic costumes and eating ethnic foods are not good enough anymore. If nothing else, we owe this to each other. The exhortation to be Singaporeans “regardless of race, language, or religion” in the national pledge is not an end in itself, but a means “to build a democratic society, based on justice and equality” from which other achievements follow.

Lianhe Zaobao published a response to the scholars’ open letter on 15 June 2021. There is no reference to where the various pieces sourced their interpretation of Critical Race Theory in any of Lianhe Zaobao’s articles so far.